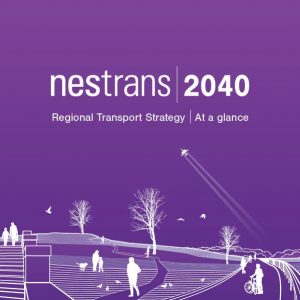 The transport vision and direction for the north east for the next 20 years enters its last lap.

Nestrans’ draft Regional Transport Strategy (RTS) will shape transport policies and actions for the period up until 2040. Next week Nestrans Board members will discuss the full draft document along with proposals for a final round of consultation.

As the Regional Transport Partnership for the North East of Scotland, Nestrans has a statutory duty to produce and deliver the strategy, known as ‘Nestrans 2040’.

To date, the strategy has had input from a wide range of stakeholders, partners and the public. It benefits from a solid evidence base, in the form of the Strategic Transport Appraisal, funded by the City Region Deal. It also links with the National Transport Strategy which the Scottish Government published earlier this year.

The new RTS focuses on four key equal and overlapping pillars that will see policies and actions to:

It is planned that the draft will be made available for wide-ranging public and stakeholder consultation for a planned ten-week period later this year.  Once all views have been gathered and evaluated, Nestrans will consider the final version later and submit the strategy to the Cabinet Secretary for Transport, Infrastructure and Connectivity.

At the 24 June meeting, the partnership’s Board will have the opportunity to discuss the consultation plans, which include the option of virtual exhibitions and online discussions to comply with Covid-19 restrictions.

The 2040 strategy takes a different approach to that of its 2008 predecessor and the 2014 refresh. The focus supports behaviour change to ‘lock in the benefits’ of the infrastructure and investment delivered by the previous strategy, including AWPR and rail enhancements.

Chair of Nestrans Councillor Sandra Macdonald said, “Most of what was set out in the last strategy has been delivered; the last 12 years have brought significant investment to enhance connectivity in the north east.“This is the third RTS we have developed for the area. It is a comprehensive strategy, focusing on making the best use of existing and future infrastructure. It considers many issues, from mass transit solutions including Bus Rapid Transit proposals, to discussions on managing the demand for car travel, transport accessibility and affordability, as well as championing active and sustainable travel.”

Vice-Chair of Nestrans Councillor Peter Argyle said, “Much of the success of the last strategy was thanks to an agreed approach, and that really is critical when the delivery of an RTS depends, not only on Nestrans but also on our partners, implementing projects in a clear and co-ordinated way.

“The same comprehensive collaboration has developed this strategy and that will drive its success. It puts us in the best possible position to deliver the transport changes which support the wider long-term goals that the region has set for itself. When the final round of consultation commences, I would encourage everyone to share their views.”